Pests, (and I don’t mean children just before Christmas!) 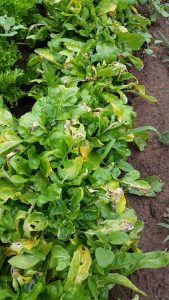 Last week we lost lots of baby spinach due to the heat and them not getting enough water pretty much. Well, not lost obviously, but died or leaves shrivelled. This week the rocket is smothered in a nasty pest that we think has come in through the compost. Michael has contacted those wonderful older gurus of his that know and it seems to be the Sciarid Fly. Wikipedia, if you care to look, calls them ‘a family of flies, commonly known as dark-winged fungus gnats. They are a pest of mushroom farms and commonly found in household plant pots. One of the least studied of the large Diptera families, probably due to the small size of the insects and difficulties with identification. Currently 1700 species are described but an estimated 20,000 species probably are waiting for discovery.

Great! Who is looking for a research job out there?

Michael is dealing with these invaders organically but the bottom line is, get in early to the markets for rocket or readjust your recipes for different fresh greens!

The flies burrow into the ground to lay their eggs in the soil and the larvae hatch & eat the roots of the plants. This is what the poor rocket looks like!

Other than that all is going well. We got 12ml rain which was better than nothing and the plants leaves sucked it up but not really anywhere near enough. Feels like February weather doesn’t it?

There is lots of lovely other produce as usual at Taylor Square & Carriage Works Markets on Saturday morning so enjoy the food!

Have a peaceful week,